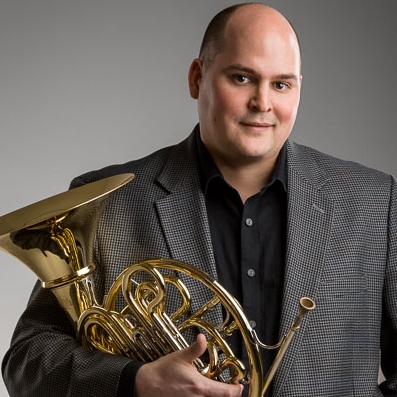 Dr. Zachary A. Cooper is Assistant Professor of Horn and Music Theory at the University of Montana, Principal Horn of the Missoula Symphony Orchestra, and serves as Secretary of the Northwest Horn Society.  He has performed and given masterclasses in Canada, Mexico, and across the United States.  His private students have achieved full scholarships to study music at universities across the United States and his university students have successfully gained employment as educators and performers. Cooper frequently presents masterclasses and recitals at many schools and universities and is a strong proponent of educational outreach.  Prior to UM, Cooper served as an Early College Faculty Mentor and Lecturer of Horn and Music Theory at Morehead State University (MSU) in Kentucky.  His duties included performing with the Baird Winds and Horizon Brass.

An avid chamber musician, he and flutist Jennifer Brimson Cooper have formed Cooper Duo, which is actively premiering new compositions for flute and horn across North America.  Cooper is also a founding member of TradesMann Trio, which presented his research on the low brass trio genre at the 2014 International Women's Brass Conference, and Artisan Brass, a horn and tuba duo.

Cooper is a previous winner of the SouthEast Horn Workshop (SEHW) Solo Competition and the SEHW High Horn Mock Audition.  Additionally, he has been a prize winner in the Susan Slaughter International Solo Brass Competition professional horn division, finalist in the International Horn Society Farkas Solo Competition, and a semi-finalist for the William C. Byrd Young Artist Competition in Flint, MI.

He earned a D.M.A. in Horn with a cognate in Music Theory from the University of Cincinnati College-Conservatory of Music (CCM), an M.M. in Horn from CCM, and a B.M. in Horn Performance from Florida State University. Cooper's principal teachers have included Dr. William Capps, Duane Dugger, Randy Gardner, and William C. Robinson.

Doctor of Musical Arts in Horn (Cognate in Music Theory) - 2013

Bachelor of Music in Music Performance - 2005

Music for Horn and Flute Duo