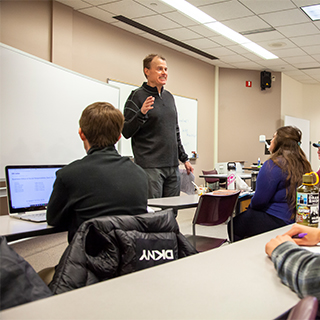 College of Business - Faculty and Staff

The University of Montana transforms lives by providing a high-quality and accessible education and by generating world-class research and creative scholarship in an exceptional place. We integrate the liberal arts and sciences into undergraduate, graduate, and professional studies to shape global citizens who are creative and agile learners committed to expanding the boundaries of knowledge and to building and sustaining diverse communities.

The University of Montana (UM) is a multi-campus university serving the western portion of the state of Montana. UM's main campus, located in Missoula, was founded in 1893.  Within UM-Missoula is Missoula College, a unit offering only associate degrees.

Nestled in the heart of western Montana’s stunning natural landscape, the University of Montana is a place where top-tier students, educators and researchers from across the country and around the globe come and thrive. UM is located in Missoula, Montana’s second-largest city with a population of 80,000 residents. The University draws a diverse population to Missoula and helps cultivate an educated, engaged and vibrant community.

More than 10,000 students attend UM and Missoula College, where they receive a world-class education in a broad range of subjects that include the trades, liberal arts, graduate and postdoctoral study and professional training.

The main campus spans 56 acres at the base of Mount Sentinel along the Clark Fork River and includes the park-like Oval at the center of campus, more than 60 architecturally unique buildings and a 25,200-seat football stadium. UM's 180-acre South Campus offers student housing, a golf course, soccer fields and an outdoor track facility. Missoula College occupies two sites in central and west Missoula.

UM affiliate campuses outside of Missoula and their highest degrees, excluding joint programs, are:

UM is part of the Montana University System (MUS).  As a state institution, UM operates on a biennial (2-year) basis.  Decisions made by the Montana State Legislature and the MUS Board of Regents (BOR) have a direct bearing on our institution, and UM is accountable to taxpayers concerning our use of state resources.  UM’s fiscal year is July 1 through June 30.  UM’s academic year is based on three semesters (autumn, spring, summer) and a three-week wintersession between autumn and spring semesters.  See UM’s Strategic Plan, UM 2020:  Building a University for the Global Century.

To be recognized as a premier business learning ecosystem and be a leader in economic development.

The College of Business at the University of Montana creates transformative, integrated, and student-centric learning experiences, propelling our students to make immediate and sustained impact on business and society. We nurture our students’ innate work ethic to develop confident problem solvers and ethical decision makers. We pursue thought leadership and collectively create opportunities for a better life for our students, faculty, and staff.

The College of Business traces its origin to 1914 when a “Department of Commerce” was established as a branch of the Department of Economics. Classrooms were provided on the top floor of Main Hall and approximately 40 students enrolled for courses in accounting, money and banking, credits and collections, shorthand, and typing.  Two years later, five students were the first to receive bachelor’s degrees in commerce (students used their credits from other areas in the University combined with their commerce credits).

In 1917, the Department of Commerce became the Department of Business Administration, and a number of new courses were added, including commercial law, American business methods, business organization and management, salesmanship, real estate, insurance, business for women, and additional accounting courses.

In 1918, the State Board of Education authorized the organization of a College of Business, and in the fall of 1919, Shirley J. Coon (M.A., Ohio State University) became the first dean.  A two-year course for juniors and seniors was offered, and the new school was given offices and classrooms in the basement of Main Hall.  By 1920, 31 juniors and seniors were majoring in business administration and 160 freshman and sophomores listed it as their intended major.  The total of 191 students gave the School the largest enrollment on campus.

Dean Coon resigned at the close of 1926-27 school year and was replaced by Robert C. Line (M.A., Harvard).  By 1929, the business curriculum had been extended to include courses in corporation finance, marketing, foreign trade, labor problems, and public utilities.

Enrollment continued to grow throughout the 1930’s, declined sharply during World War II, and then increased significantly during the post war era.  In 1949, the undergraduate business program was accredited by AACBS(Association to Advance Collegiate Schools of Business International), making it one of the first 50 U.S. business schools to receive AACSB accreditation.

By 1964, the School had grown large enough that Dean James L. Athearn created four departments: Accounting, Management, Business Education and Office Administration, and the Bureau of Business and Economic Research.  The Bureau had been initially created in 1948.

With respect to graduate business education, a Master of Science in Business Administration degree was authorized as early as 1922, but lack of money resulted in extremely slow progress in developing the necessary graduate courses.  Finally, all business graduate education was suspended in 1950.  Efforts to offer graduate education resumed in the early 1960’s and in 1965, the School was granted authority to offer the Master of Business Administration degree.  The first MBA degrees were awarded in 1967.  The program remained relatively stable in enrollment figures until the mid-1990’s when expansion to off-campus locations throughout the state began.  The Master of Accountancy (MAcct) Program has been offered by The University of Montana in Missoula since 1992. Since its inception, this graduate program has been accredited as part of the College of Business. In 2001, the MAcct was also granted separate AACSB accounting accreditation.  The Master of Science in Business Analytics was launchedin fall 2016.

In 1996, the COB moved into a new state-of-the art building, the $15.5 million Gallagher Business Building.  This 111,000 square foot, four-level facility has classroom seating (in various configurations ranging from small seminar rooms to a 250-seat tiered classroom) for approximately 1,200 people.  It also contains all COB faculty and staff offices, office complexes for affiliated business units, two major computer labs, several student lounges and study areas, numerous conference rooms, and an Executive Board Room. All business classes are taught within the Gallagher Business Building (GBB).  The Harold & Priscilla Gilkey Building is adjacent to GBB, and it houses COB's Center for Enterprise and Executive Development.

AACSB accreditation standards impact much of what COB does, including faculty qualifications upon hire, faculty research productivity expectations, assignment of faculty to courses, content and form of degree programs, continuous program assessment, and much more.  The standards are very mission-centric.  Every five years, COB reports to AACSB and receives a site visit where a team examines our programs, faculty, staff, finances, and strategic direction in some detail.  Every one to two years, faculty attend a retreat to provide a concentrated opportunity for discussions, including updates on accreditation standards.

The COB organizational chart is available for faculty to reference, as is the UM organizational chart.  The COB includes three academic departments: Accounting & Finance (A&F), Management & Marketing (M&M), and Management Information Systems (MIS).  Two centers are formally affiliated with COB, the Bureau of Business and Economic Research (BBER) and the Montana Small Business Institute (SBI).  COB also houses and/or has affiliations various other centers or organizations, which are discussed more fully in “The People” section of this handbook.  Five professional advisory boards are active in COB:  one for each academic department, one for BBER, and the Dean’s Business Advisory Council.  These advisory boards meet once each semester.  In addition, the Dean’s Student Advisory Council meets once or twice a semester and includes representatives from student groups and other at-large members.