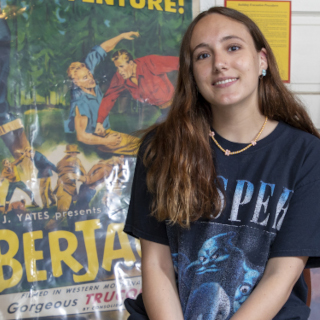 Richard S. Buswell, "Seeds in a Corral" 2008,
duotone photograph, courtesy of the artist

The exhibition presents the works of Montana’s oldest active group of contemporary women artists. For over three decades, the group has met regularly in the home and studio of recently deceased artist Nancy Erickson to draw the female model. The show records the history of the PCLS and focuses on the varied works of its current and past members.

This stunning exhibition features inspired folk and fine art from Mexico to Peru. The works include festival masks, sculpted saints, and brightly colored textiles and graphic arts that reveal the popular piety and aesthetic sensibilities of diverse communities across Latin America. In this show, we welcome the Hoyt family back to MMAC as they continue to share their remarkable collections with our community.

An Authentic Voice: The Architecture and Art of Phil Korell

For over 60 years, Montana architect Phil Korell has created buildings of exceptional beauty and integrity of design. Raised on a ranch outside Utica and educated at the University of Washington in traditional methods of design, Korell learned how to shape buildings in harmony with Montana’s distinctive Western landscapes and traditional culture. Korell created some of the state’s most distinctive buildings in the second half of the 20th and early 21st centuries.

The exhibition features photographs, drawings and plans for Korell’s signature buildings, as well as examples of his fine art drawings and paintings.

Please join us for the opening reception, April 15, 5:30pm-7:30pm at the Performing Arts and Radio/Television Center at UM.

April 15 – June 25, 2022 in the Paxson Gallery of UM’s Performing Arts and Radio/Television Center.

Imagining the West: Selections from the Stan and Donna Goodbar Collection of Western Art

The MMAC recently received a significant art collection of 125 Western works of art from Stan and Donna Goodbar in 2021. This collection reveals how artists interpreted the west during the 20th century. MMAC is proud to present a selection of these works featuring artists who made a living primarily as illustrators, both shaping and reinforcing quintessential myths about the West’s important archetypes, its settlers, cowboys and Indigenous inhabitants.

For more information and the full press release follow this link.

The MMAC opened two exhibitions with avian themes in the fall of 2021. The first, "Avis Marvelous: Ornithology in 19th Century Art and Science" opened on Friday, September 24, and ran through January 8, 2022 in the Paxson Gallery of UM’s Performing Arts and Radio/TV Center.

This exhibition, about one of the most popular and fertile areas of study in the 19th century, explored the convergent interests of artists and scientists. It combined prints from the Lee Silliman Collection and specimens from the University of Montana’s Philip L. Wright Zoological Museum.

“This exhibition presents the ways artists and scientists analyzed, documented, and celebrated avian life in the 19th century and explores the various strategies employed by artists and scholars of the natural sciences to create visual representations for works of art, publications and other printed works. It also recreates museum displays meant to educate and enlighten the public about bird life in the Americas,” said H. Rafael Chacón, the museum director.

A second exhibition, "The Speyer Collection of Contemporary Art,” opened on October 15 and ran until January 8, 2022 in the MMAC’s Meloy Gallery in the PARTV Center.

Helena-based collector Tim Speyer is sharing a selection of works of art from his collection focused on human interactions with birds. According to MMAC director Chacón, “Speyer’s collection reveals a penchant for the surreal, enigmatic, and poetic among contemporary artists from around the world. Much of the work is figurative and focused on the complex ways humans share this planet with our fellow creatures.”

Educational programming included a lecture by collector Lee Silliman on September 28 and a panel discussion with artists Barbara Michelman and Bishop Storrs, authors Marc Beaudin and Charles Finn, and biologists Angela Hornsby and Zac Cheviron on October 21. Both events can be found at the MCAT webpage at the following links:

Movement: Graphics and the Olympic Games

Since their creation in 1896, the modern Olympic games have become an important cultural phenomenon in our world. The games are an attempt to revive the ancient values of athleticism, sportsmanship and peaceful competition within a united global community. The graphic arts, primarily in the form of colorful posters, have been a prominent way of broadcasting those values and promoting the individual games hosted by nation states over the last 125 years.

This exhibition brings together 35 compelling posters on loan from the collection of Paul Thomas representing the exciting history of the Olympic games and th epower of the graphic arts to articulate important social movements. In addition to revealing the evolution of graphic design, these posters also highlight the importance of global events and the development of mass culture across the 20th and 21st centuries.

The MMAC wishes to thank Paul Thomas for the loan of these works. We also greatly appreciate the efforts of Curatorial Intern Ashley Rickman and UM Student Gallery Attendants Kain Brauneis, Hannah Davis and Ronin Hoffman for assisting in the installation of the exhibition. Additionally, we thank Humanities Montana, the Montana Arts Council, the National Endowment for the Arts and a private donor whose generous financial contributions have made this exhibition possible.

Visit out Virtual Visits page for a Virtual Docent Tour to "Movement: Graphics and the Olympic Games" at the Montana Museum of Art and Culture. The exhibition catalog and other publications are available at MMAC and can be ordered online.

The Montana Museum of Art and Culture features “Richard S. Buswell: Fifty Years of Photography” from May 28 through Aug. 28 in the Paxson Gallery of UM’s Performing Arts and Radio/TV Center.

For over five decades, Richard S. Buswell has photographed Montana’s ghost towns and homesteads. This 50-year retrospective exhibition reveals the wide range and variety of his photographs. Beautifully crafted, always thought-provoking and sometimes unnerving, Buswell’s photographs of abandoned places, buildings and artifacts demonstrate his powers of observation and his affection for his home state.

Visit out Virtual Visits page for a Virtual Docent Tour to "Movement: Graphics and the Olympic Games" at the Montana Museum of Art and Culture. The exhibition catalog and other publications are available at MMAC and can be ordered online.