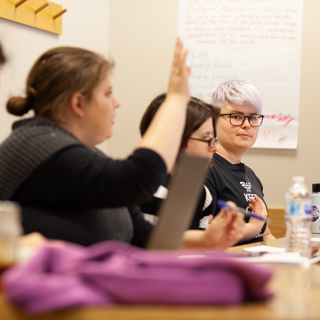 Contact the Creative Writing Program for information on the submission deadline.

Be sure to include a cover page with title and contact information (name, email, phone number and address). Submissions are limited to one per enrolled student at University of Montana.

This award has supported writers since 1982.

Born and raised in Wyoming, H.G. Merriam arrived in Missoula in 1919, fresh from two degrees at Oxford where he had been in the first class of American Rhodes Scholars. He began teaching creative writing in 1920 with five students; together they founded a literary magazine that became Frontier—later titled Frontier and Midland—a distinguished quarterly journal published at the University of Montana from 1920 to 1939. Contributors included then-emerging talents Wallace Stegner, A.B. Guthrie Jr., William Saroyan, Dorothy Johnson, John Mason Brown, Weldon Kees, Thomas McGrath, and many others.

One particular strength of the journal was its frequent publication of work by young authors, a custom that the Merriam-Frontier Award both honors and continues. The first award was granted to Frances Kuffel, a senior in English at the time, in 1982, for a volume of poems. H.G. Merriam retired in 1954, and passed away in 1980 at 96. In the words of William Kittredge, "If it hadn't been for him, Montana wouldn't have been a literary state."

H.G. Merriam was responsible for creating a Bachelor's degree in creative writing at the University of Montana. It was the second of its kind in the United States (Harvard, where he had also studied, being the first). The Master of Fine Arts degree in Creative Writing was established and approved in 1964, guided by then-chair Warren Carrier (MFA, Iowa). H.G. Merriam also ran summer writing conferences in the 1930's and 40's with such luminous individuals as Carl Sandburg, Walter Van Tilburg Clark, Bernard Malamud, and Mildred Walker.