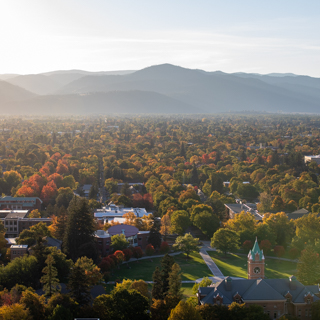 The UMZM was founded 1897 upon the arrival of the first Biology professor ever hired at University of Montana, Dr. Morton Elrod. The oldest modern specimens in the collection were part of Dr. Elrod’s original Ornithology teaching collection dating back to1880.

The museum grew rapidly in the 20th century, mostly at the direction of Zoology professor Dr. Philip L. Wright who took over as UMZM curator in 1939. Dr. Wright contributed specimens to the museum through his active research program, by providing field experiences for UM students, and through his meticulous documentation of bird and mammal biodiversity in Montana. In recognition of his extraordinary dedication to the growth and use of these collections, the museum was dedicated in Dr. Wright's name shortly before he passed away in 1997.

Many faculty, staff, and students have made significant contributions to the UMZM through the yeras. Prominent among there were mammalogist Robert S. Hoffmann, later Secretary of the Smithsonian National Museum; bear biologists John and Frank Craighead; mammalogist Bart O’Gara; mammalogist Kerry R. Foresman, author of The Mammals of Montana; and ornithologist Paul Hendricks, co-author of Birds of Montana.

The UMZM underwent a major renovation in 2018-2020, funded by the National Science Foundation as part of their program for Collections in Support of Biological Research. The Friends of the Philip. L Wright Museum, the Division of Biological Sciences, and the entire University of Montana community have been integral in their support for the museum's continued expansion in collections and scope.

The UMZM is the repository for vertebrate specimens collected by University of Montana researchers, as well as specimens from the Montana Natural Heritage Program, the Montana Natural History Center, Flathead Lake Biological Station, the Montana Department of Fish, Wildlife and Parks, and various affiliated researchers and groups in the region. While the UMZM focuses on birds and mammals of the northern Rocky Mountains, it is also home to scientifically and educationally valuable specimens from around the world. The museum has a growing number of tissues, parasites, photographs, and other materials for documenting and studying patterns of biodiversity across space and through time.