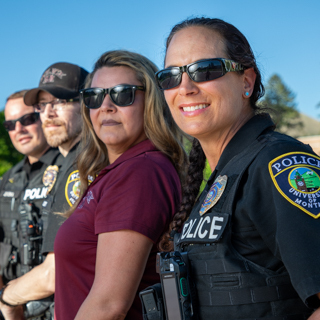 Immediate Response to an Active Shooter

WHAT YOU DO MATTERS!

When seconds count, help is only minutes away!

The University of Montana and the University of Montana Police Department understand that the best response to an active shooter situation is one that has been thought out and prepared before the emergency occurs. The best way to enhance preparedness is through a community approach.  UMPD provides resources and information directed towards active shooter awareness, incident response, and workplace violence.

In many cases, there is no pattern or method to the selection of victims by an active shooter, and these situations are by their very nature unpredictable and evolve quickly. Since 2002, ALERRT Center has trained more than 130,000 law enforcement officers in 50 states, Puerto Rico, Guam, and the District of Columbia in the Advanced Law Enforcement Rapid Response Training (ALERRT) ™ standard for active shooter response, primarily through federal and state funding.

Law enforcement officers and agencies are frequently requested by schools, businesses, and community members for direction and presentations on what they should do if confronted with an active shooter event.  The Civilian Response to Active Shooter Events (CRASE) course is designed and built on the Avoid  Deny  Defend™ strategy developed by ALERRT™ in 2004.  This course provides strategies, guidance and a proven plan for surviving an active shooter event.  Topics include the history and prevalence of active shooter events, the role of professional guardians, civilian response options, medical issues, and drills.

What is the difference between "Avoid Deny Defend" and "Run Hide Fight?"

Many schools and businesses prefer the terminology of Avoid Deny Defend, because it is more in line with their human resources department and educational standards. They believe that "Avoid" is a more palatable word than "Run," because "Run" disenfranchises those who are unable to physically run. "Deny," as in denying access to you and your location, is a stronger word than "Hide.  "And while "Fight" is an action that is forbidden on most school campuses, "Defend" is a last resort safeguard, a right and an opportunity to guard against life threatening action. Ultimately, whichever plan you use, we encourage you to have a plan - and be aware of your surroundings, be safe and know that What You Do Matters.

What about hiding under desks or “playing dead”?

Whether you live or die while hiding under a desk or playing dead is a matter of chance. In many events, the shooters shoot people who are down in order to make sure that they are dead. We never advise it as a primary strategy.

The University of Montana Police Department frequently provides presentations on what students, staff, and faculty can do if confronted with an active shooter event. The Civilian Response to Active Shooter Events (CRASE) course, is designed and built on the Avoid, Deny, Defend (ADD) strategy developed by ALERRT in 2004.  This course provides strategies, guidance, and a proven plan for surviving an active shooter event. Topics include the history and prevalence of active shooter events, and the civilian response options.  These training sessions are all FREE OF CHARGE.  UMPD will also provide a safety assessment of your work space when requested.

AVOID - starts with your state of mind

DENY - when getting away is difficult or maybe impossible

DEFEND - because you have the right to protect yourself​